We are all Eternal Fags 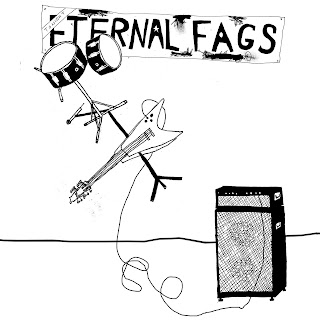 In Dalston there is a very special venue called 113 and I'm not going to tell you anything more, not even a link. In my mind you have to show a certain level of dedication to the London gig scene to get to go to 113 - of course this means that you'll probably end up there 'cos your mate told you about it, but that's beside the point. But if you want in, put in leg work yourself.

But needless to say, any band that play 113 is worth your time. The venue has a great ear for booking truly inspiring bands that seem to keep going despite what anybody thinks of them and you've got to admire that.

One such band that have graced the threshold of this awesome venue is Glaswegian trio Eternal Fags. Chaos and structure are not easy bedfellows but Eternal Fags are that kind of band that use the latter to make the former, to great effect. Combining wailing gut wrenching yelps, clattering guitar and drums around a solid punk base. At times, in fact all the time, Eternal Fags sound like a band on the brink descending into a complete shambles at every turn, they dance on the edge of oblivion, toy with total chaos, flirt with anarchy just for fun but, and this is the strange thing, never fall off the edge. This is chaotic rock at its best, a complete mess that hides a driving rhythmic heart deep at its core.

Eternal Fags played 113 at the back end of May with Leeds trio Pifco and put out a self titled album (well I say album, it clocks in at only 17mins, that says it all really, ace!) on Scottish label Winning Sperm Party around the same time, you can download it for free here, there's also physicals too. I'm warning you now, this shit is not for the faint hearted! See what I mean...