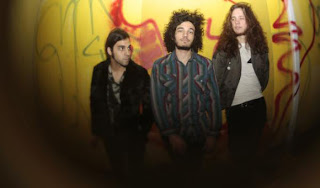 Seattle has been a mecca for grunge worshippers ever since the heady days of the late 80s. It is funny that many music 'gurus' can be so dismissive of the genre - it was integral in injecting a refreshing burst of energy (ok, via angst...) into the rock scene. Besides a good grunge band simply fucking rocks.

Night Beats aren't what you would label as a grunge band per se. Having more in common with psych-blues-rock compatriots The Black Angels than Nirvana, nevertheless the band has set about tearing their new home (they originally hail from Austin Texas) a new whiskey filled arsehole. What they offer that sets them apart is purely distilled psychedelic liquid gold - the foundation of the blues trip fest, cut of all its (admittedly brilliant) trimmings to create a lean mean rocking beast.

Put out by Trouble In Mind in July, their first official EP contains the epitome of concise rock 'H-Bomb', a true showcase of Night Beats. They have just played Austin Psych Fest (what a brilliant festival - The Black Angels, Raveonettes, and Warpaint amongst others). They are big news. And they are shaking down Seattle town once more.