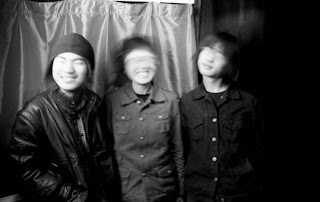 Carsick Cars are amazing. Being sick in a car is not. However, it would be if Carsick Cars was playing on the stereo - you would be grinning from ear to ear as the bile dripped off your chin and stained the upholstery of the seat, effectively eradicating Daddy's precious toy's New Car Smell, bringing the ire of your entire family as they bathe in the heat of your vomit - and there is still 6 hours til your final destination...

So yeah, I guess I should say why such a scenario would be close to the raddest thing on earth. Because Carsick Cars fucking kick. The fact they're from China is certainly a quirk for those who only like obscure as fuck bands (which can at times be me, but I must say I never hesitate to hold onto a band like its my last piece of Easter egg, feverishly preserving it til the end of days...), but Carsick Cars deserve so much more than that. They offer us something different in the sense that many bands have tried and failed to do what they do with apparent aplomb - mirror Sonic Youth. The proof is in the pudding. These guys embrace everything from Glenn Branca to Suicide to The Velvet Underground (a personal favourite of the band's) in the space of a single song - seamlessly. Thurston Moore handpicked them personally for 2007's European tour. They released their 2nd LP You Can Listen You Can Talk last year. They rocked South By SouthWest this year. And I implore you - find their albums and buy them - then play the fuck out of them. NOW.