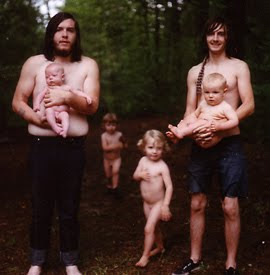 Tweak Bird are a band that are generating quite a bit of buzz in the past few months. Laying on the grooves over a sunbaked desert, this Illinois(e) duo have the audacity to combine Kyuss level drones and growls with 70s classic rock vocals and horns - and then make it all work like these sounds were invented just to be together, and all uses beforehand have been bastardisations of the norm. Furthermore, Tweak Bird do it all in soundbites of 5 minutes or less! Eat that Mars Volta!

Their debut album Reservations will be out in August via Souterrain Transmission, watched over by Melvins maestro Dale Crover (ah, so is there method in the madness?), but they have released a 7" that is a perfect taster to what Tweak Bird brings to its sonic palette, and one cant help but imagine that this just the opening to an endless portal of possibilities. Grab the single below, then try to jazzercise to it.