Wearing White Denim In The Key Of D 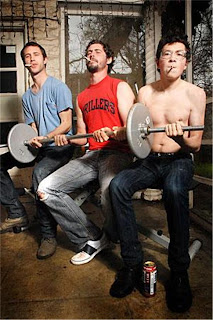 White Denim have always owned - their unbeaten run of SxSW's Best Live Act over the past 3 years attests to that - and we here at Sonic Masala certainly are in their court. Yet the universal jizztastic mangasms that should have showered on these guys has so far failed to rain down. Hopefully this is all about to change...

Opening up with 'It’s Him!' – a track that in three minutes presents a laidback country jam, some jazz flourishes in the middle third before exiting via crunching its way to a rustic Led Zep finale – the Texans waste no time in stating their intent on D, their fourth studio album. Having made a name for themselves as a an incendiary live act, the quartet have spent the last five years burning up stages and producing a gamut of material that ticks off almost every benchmark of 60s and 70s Americana, blues and garage that has ever existed. This suggests that White Denim on record are messy and hard to reign in – on the contrary. D showcases a band that for all intents and purposes is an exemplary jam band with an endless supply of energy, emotion and rock nous, yet is intent on presenting their entire oeuvre in bite-sized pop song chunks.

Following 'It’s Him!' is 'Burnished', a incessant yet languid psych groover that segues into 'At The Farm', a brilliant psych jam outro that is obligatory on a WD release, yet feels more satisfying than its four minute running time would let on. 'Street Joy' is a euphoric rambler that Bon Iver would be happy to carve out, whilst 'River To Consider' spews forth a legitimate Jethro Tull-esque flute solo and 'Bess St jumbles' it all together into a concise rocker that embraces all these touchstones in a track that barely breaks a sweat.

In fact that is one of the biggest features here – that no matter what idea these boys try to convey, it is kept within a succinct, structured framework. D shows that White Denim aren’t fraying with age but strengthening, gaining colour, and effortlessly defying the wear and tear that others of their ilk are likely to take on.

And the nerdy guy still loves getting his shirt off in promo photos. 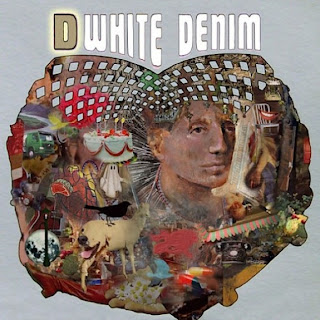