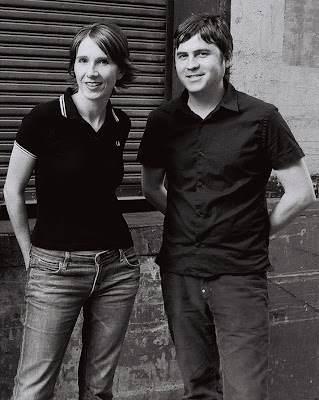 Is it just me that hears Mew's 2003 album Frengers all over LA band Fonda's Better Days EP, their first release in over eight years? 'A Love That Won't Let You Go' especially. It also reminds me of another album that I can't quite put my finger on... Maybe this isnt so weird, as Fonda all but disappeared in...yep, 2003. Coincidence? I think not...

Anyway, duo David Klotz and Emily Cook are new to me, and incredibly quiet to those who know and love their 2003 LP Catching Up To The Future, but they obviously havent been idle. The five tracks on offer here are replete with lush boy/girl harmonies and twee pop structure against a menacing wall of guitars. Its the epitome of dream pop, heavily ensconced in shoegaze excess - in short, beautiful. Thanks to Crash Avenue for being part of the process that got this out too!