Peeling Away The Chemicals 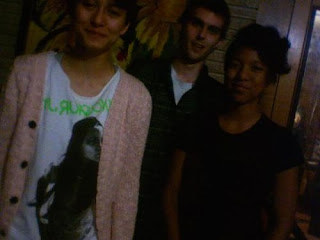 I was pretty impressed with Chemical Peel, another little album I received in the mail the past month, that has taken me forever to get around to talking about. The first track I listened to starts off very Coathangers-ish, but a little bit more...well, irritating, with 'Gone' - I like the slightly off-kilter beginning, then the speeding up - but the girl's screechy vocals grates after a while, particularly in the chorus...yet I still kinda like it. Go figure.

Then 'Left' enters the fray, and I really liked this one. Think of The Raincoats a little, but moreso the more tropical swaying moments of Dalston trio Trash Kit or, more specifically, Electrelane, and you have an idea of why this is a favourite. There is a fair bit of to-ing and fro-ing after this, yet the reason I like this is that there is some serious potential here, and I also can picture seeing these South Carolina guys in a dingy artspace somewhere and thinking they aren't actually half-bad. Doesn't sound like a resounding compliment, I know, but I have played this record quite a bit this week, so it has considerable hooks hidden therein.

The self-titled release is out on cassette via Fork & Spoon Records - you can purchase it here - its purple tinted, and only $5!