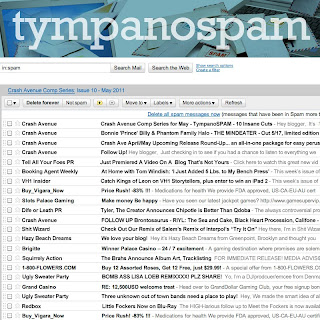 It feels like ages since Ive put up something from Mike and his pals over at Crash Avenue! Well we have a Fonda post coming up soon, but before then I thought to make up for such an oversight Id make a mixtape that references the mixtapes they have been doing the last couple of months. Each month there is a mixtape named after a music blog - April's was Daytrotter (called Daysquatter) and May's was Tympanogram (titled Tympanospam). They focus on lesser known and DIY artists, as well as stuff from their friends and favorite established artists, and package it all together in a digital compilation free to download. You can download em over here - but I thought Id put my list together of my favourite acts they have had in the past couple of weeks. None of which you are likely to have heard, which makes it all the sweeter! Let the humpday commence in style!