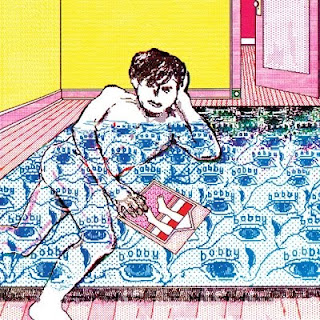 BOBBY are a Massachusetts collective that delve into woozy, dreamy soundscapes. Although inadvertent, this ended up being the perfect moniker for the sounds the group makes, after the found a book written in 1985 called BOBBY. The titular character is imaginary, and the members found a kinship with the publication, so much so that they used bits of the artwork from the book for their album cover. The track below, 'Groggy', has been around the blog traps for a little while, but seeing as the album was only released this week I thought Id hold onto it until now. So...here it is! Its a solid release, well worth the small amount of dough to turf out for it, believe me! BOBBY has been put out by Partisan Records - you can get it here.