Cast In The Middle 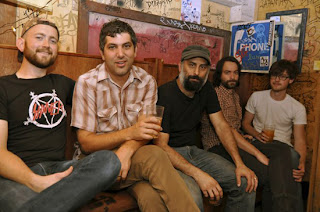 Can you believe that The Appleseed Cast have been around since 1997? Yeah, a long time. I heard a track of theirs back in 2003 when I was stranded in Roma, a small town in the middle of Queensland, Australia. I was starved for music, and it was that experience that started my journey of searching further and wider (via the internet - podunk cowpoke covers bands dont cut the mustard with me) for that next sonic fix. It reaped its own dividends - Explosions In The Sky being the biggest "discovery" - but I also came across TAC's 'Max' on Deep Elm Records' The Emo Diaries No. 2 (seriously, that's what the compilation is called!) and really enjoyed the complexities of it. They have ebbed and flowed as far as musical prowess goes, but there have been moments on albums such as Low Level Owl and Peregrine that they have courted true excellence.

Its kind of fitting that I was in the middle of nowhere when I heard TAC for the first time, as they themselves are from a similar clime - Lawrence, Kansas to be exact - and their new EP, Middle States, is pretty much about that experience. Its an addictive little 4 song player, one which has been going around and around here since receiving it a couple weeks ago. It holds onto the warmth that has been creeping into their post-rock sound over the past few years, and gives us a little insight into where they and we are heading for their eighth album due next year.

Middle States is out in June via Graveface Records.