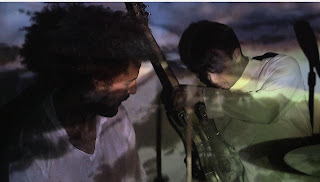 Constantly churning out exploratory classics, Chicago's Thrill Jockey is privy to some amazing collaborations amongst likeminded souls. One I wasn't expecting (but still makes a fair degree of sense) is Life Coach. Last year Trans Am's Phil Manley released a solo record with this as its title, yet like Jason Molina and his Magnolia Electric Company, he liked the process enough to make it a project in and of itself. The collaborative process comes from Manley joining forces with Jon Theodore. This excited me for a number of reasons. Whilst Life Coach wasn't something that connected with me in 2011 (which is bizarre, since since listening to it again in the past week it's brand of kraut-inflected motorik minimalism is pretty damn awesome) I have always been in awe of Trans Am's sonic explorations - I bought Futureworld in my first year of uni based solely on its cover art and haven't looked back. Theodore was the original drummer from proto-prog act The Mars Volta (and for the record, I loved them in the beginning - De-Loused In The Comatorium is actually right up there in my favourite albums of the '00s - and I still kinda like em, despite their douchery - let the daggers fly), and he was by far the best. Since then he's ..., and there was that One Day As A Lion project he did with Zach de la Rocha. The key is that Manley and Theodore played together on Golden, and have been spiritual and musical buddies for nigh on two decades.

So what do Life Coach bring to the table? Alphawaves, effectively a continuation of Manley's cyclical solo instrumentals that nevertheless grow into amorphous beasts due to Theodore's unrestrained style of playing. He is a truly kinetic force, and his inclusion on songs like 'Lifeless Possibilities' is breathtaking. The album is further augmented by the inimitable Isaiah Mitchell (the brilliant Earthless and Golden Void) on lead on a few songs, most notably on face melter 'Fireball'. The album is apparently played in sequence in its entirety when performed live, and you can see why. Essentially an exploration in drone and rhythm in various genres, from Endless Boogie-esque free form rock to shoegaze, Alphawaves is unrelenting in its groove, failing to truly ease off its intensity, rather letting it shift incrementally. It's the variations in tone and style that shows off Manley's various artistic facets, and it becomes a bit of a masterclass due to the members involved. 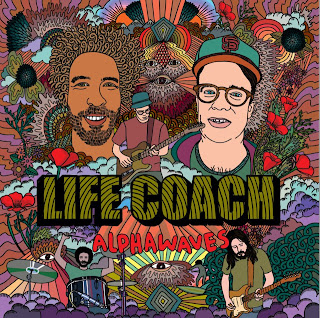 You can buy Alphawaves here. Buy now and you can bundle it up with Life Coach too, well worth the effort. I don't expect Life Coach to be a long-term endeavour - but you never know. There has to be a music god out there somewhere...