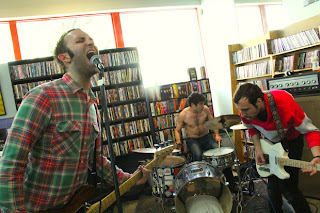 I mentioned in a recent post about Brisbane band Cobwebbs that it pisses me off when people assume that something is cool just because it is inaccessible. I know people who say they like things because they are oblique, obtuse, confrontational, indecipherable, and therein lies the attraction - most people will not attempt to penetrated such barriers, so the people who DO attempt it believe these artists must be geniuses. It may be true for some, but in most cases - such as the Vice review of Cobwebbs' All Around - it's utter bullshit. And totally untrue anyway - I saw a dude buy a copy from Rockinghorse Records on Saturday (I was buying Goat, Natural Child and The Animals LPs, just in case you were wondering).
I stumbled across this Impose article about Chicago band Running. Now, judging them on that name along, they (like Sydney band Songs) are very difficult to look for on Google. The writer of the article made it sound harder to hunt this band down than it truly was. as they had a album on Permanent Records and another on Captcha that came out last year. In fact, back in 2010 we wrote about that Permanent Records album right here. This isn't a "beat them to the pulse" kinda deal, I just don't like people immediately assuming that the inaccessibility of information on the Internet about something or someone means they are necessarily any good, or that they are even hiding from the perceived limelight.
Maybe they just don't own a computer.
That said, the Impose article isn't bad, and Running is fucking awesome, plus they are launching a new album on Castle Face that I believe could be one of the best records of 2013. Vaguely Ethnic is its name, and if 'Controversial PR' is anything to go buy, we are in for some serrated, bare-arse noisemongering, made by drunken degenerates in checked shirts, with bruised kidneys. The trio have going sans vocals on this one, which heightens the Pissed Jeans comparison sonically - breakneck breaking of necks are likely to ensue.
Vaguely Ethnic isn't out for a couple months yet, but rest assured, expect to hear more about this release as it comes to hand. It will be a completely amazing physical package also - they take great care in their aesthetic, something akin to Double Dagger in that respect, which only helps to heighten the anticipation. I imagine they frequent The Empty Bottle too - and if you live in Chicago and DON'T frequent the Empty Bottle, we don't know each other anymore.
Posted by Brendan T