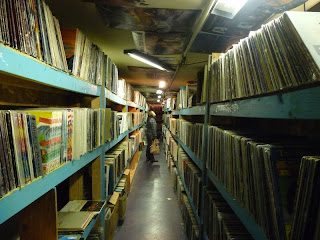 There isn't much I can tell you, other than if you aren't out and about celebrating this at your local record store, I don't know why we are friends. So many exclusive releases, it's incredible! Here is a massive list of some of the things on offer. There is a lot of local gear too, so keep your peepers gleaned!

Baltimore's Dan Deacon is a cuddly maelstrom of gummi-bear electronica, a sugar rush of giddy proportions, yet on last year's America produced a sliver of gravitas that further accentuated his relevance in the 21st century. He has a 500-press only 7" through Domino Records that utilises four - count 'em, four - drummers, two for each cut on the wax. The two tracks, 'Konomo Ripoff No 1' (essentially ripping off the Congolese Konomo No 1 - naturally), features ex-Ponytail skinsman Jeremy Hyman and percussionist Kevin O'Meara on one cut whilst the other sees ex-Double Dagger drummer/current Roomrunner frontman (and regular Dan Deacon Ensemble participant) Denny Bowen and regular Deacon cohort Dave Jacober take control. It's vintage Dan Deacon - therefore, vintage excellente. 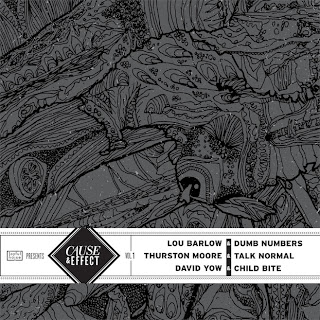 Then there is this beautiful absurdity. Indianapolis label Joyful Noise have somehow managed to collate some serious shit under a 7" serious they are naming Cause & Effect, with the premise being an influential, historically-significant solo musician on Side A, and the modern result of that musical influence on Side B. And they ain't fucking around - the first cabs off the rank include Thurston Moore coupled with Talk Normal, Lou Barlow synced with Dumb Numbers, and David Yow vomiting arm-in-arm with Child Bite. The special, limited edition run that is available only to VIP Joyful Noise members is pressed on silver/clear split colour vinyl, while the regular edition for all the other people, is printed on black/clear colour vinyl. Amazing? Fuck yes. You can actually order too - try that here - and try some of the results here and here. 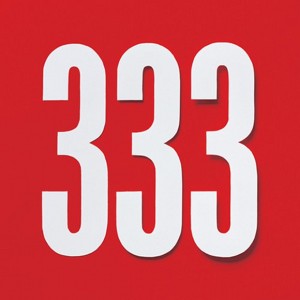 And as I mentioned last week, there is the new (posthumous) Double Dagger record 333 - only 1000, so they will sell like the proverbial. You'd be insane if you had the opportunity to pick this up and didn't - DD are definitely one of the unsung bands of the past ten years, full stop.

Finally, for some local flavour, the excellent Tym's Guitar started a record label late last year in the form of a 7" record club (which I am a part of), and it's drawing some pretty special exclusives (including an amazing Earthless one-off). This is another pretty rad one - Californian nutjob guitar rippers The Shrines. If you don't know what they are all about, think Fu Manchu, in your teens, on waaaaaaay too many Red Bull-tainted bowls. Sweet, I know.


So get there. It doesn't even matter if you buy anything. I love going to Tyms, or Title, or Rockinghorse, or Jet Black Cat, or Woolly Bully (RIP), as much to listen and to chat as I do to buy. Many friends have been made in such a place. If these places die out, so will an integral part of why music is the amazing thing that it is. And to remind you, Brisbane is having some pretty cool parties at its stores. Head to any one of the below, and trust me, it will prove to be an outstanding day - it may even change your life.

TYMS - opens at 10am. Second wave of new stock rolls out at 1pm. Bands start at 12pm, including The Nation Blue (most likely their only show in Queensland for 2013 - an absolute must-see!), Bruce!, Midnight Wolf, Emperors, Roku Music and Cannon.

Rockinghorse - opens at 9am. Bands start at 12.30 and include Per Purpose, Living Eyes, Brainbeau and Half Spoken.

Jet Black Cat Records - opens at 9am. Bands start at 12 with We All Want To, with Thelma Plum at 4 and Morning Harvey at 6.30, with a mystery band thrown in for shits and giggles.

SEE YOU THERE!!!
Posted by Brendan T