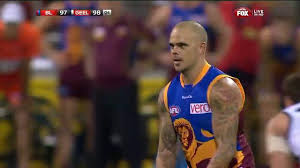 Everyone loves a good comeback story. If you are into your sport (and I'm sure most of you aren't), there have been some good ones (and in the case of the Ashes Test, an incredibly almost-ran...). Two weeks ago in the national AFL competition, the struggling Brisbane Lions faced the might of the Geelong Cats, and at one stage were down in excess of 50 points. Yet somehow in the final exchange they opened the floodgates to the point where they had the opportunity to steal victory after the siren. The task fell to Ash McGrath, who was playing his milestone 200th game. And he slotted it - miracle victory. And in some ways that's how I see today's Video Vacuum. One of the favourite segments of Sonic Masala, it's been away for a while, but here comes out of nowhere to nail it again, providing us all with respite from our dull and inane lives with a few minutes of AV ecstasy. (Can you smell the tenuousness???)

The Mark of Cain thundered back into our lives (and to be fair, the brutality and excellence of Ill At Ease shaped my teenhood so they never really left) last year with new record Songs Of The Third & Fifth. 'Milosevic' is one of the best cuts on there, and here it is as their new single. The video is pretty straight up and down, albeit with a sizable slick production, yet that has always been the way for this trio - no flamboyance, pretention or accoutrements - it's all about the slay.

One of the many diseased garage bands floating in the underbelly of Brisbane, Thee Hugs don't play as often as we'd all like. Then again, there is only so much corruption one can take before it becomes too much. The trio realise this, so they are going for a full frontal assault in the form of 12" LP Drug Use & Alcohol Abuse. 'Somebody Pooed In The Pool' is the perfect precursor - puerile, insidious, feverish - a downward spiral into the wormhole of no return. And its pretty fun too (Yuri Johnson's video is great - check out his other stuff, its all champagne). Long Gone Records, you've done it again.

Bad Dreems are embarking on a lengthy Australian tour. The four-piece's penchant for off-kilter slacker segues has slipped even further into uncharted, surreal territory on incumbent EP Badlands, playing like a laidback saunter through Dali's nightmares. If Batpiss and The Spinning Rooms are all abrasive counterpoints to Kenneth Cook's Wake In Fright nightmare, then Badlands is more the morning after, the sun filtering through the blinds, dust motes floating in the air, and you are struggling to work out where you are, why you are drenched with sweat with another person's blood on your hands, and yet are vaguely happy. C'est la vie from the Snowtown moors. Get this tapeworm of a track in your earhole, and guaranteed it will suck the life out of your insides all day, something you will be eternally grateful for even as your molars drop into your coffee and you lose the sight in one eye. Bad Dreems are becoming a reality. (The band are playing in Brisbane Thursday night as part of the Hand Games Zine launch - alongside SM alums Black Vacation and Peter Bibby, it's all happening at The End for free).

Finally we have Ghost Wave from across the Tasman, who have just launched their Ages LP on Arch Hill Records. It will also be released globally under the Flying Nun banner - a name that still rings soundly across the world (and through connecting with the excellent Captured Tracks in the US and Secretly Canadian in Canada, Ages will get a strong push). 'Here She Comes' is pretty emblematic of the rest of the record - awash with distortion, a shoegaze template tempered with a Morning After Girls-like penchant for psychedelic flourishes, its toes pushed firmly into the sand, sun-kissed minds and sugar-rush melodies. Their trick is to overload you with sweetness whilst undercut with blasts of aggression - a two-faced razorblade candy trip. Be blase with Ghost Wave at your peril.