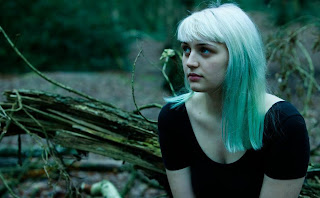 Man, I've fallen hard for this song. Whilst Saturday was all about White Hills and Houndstooth, and Sunday was chilling on the Porch(es.) with Baby Birds Don't Drink Milk, I was always coming back to 'Prisms', the new single from Ides (AKA Alanna McArdle from Joanna Gruesome, who also have a new-ish track out) as part of Art Is Hard Records' Postcard Club. The step-up in production values (her earlier stuff is considerably lo-fi, and whilst the earnestness is evident, McArdle's power is somewhat muted) is a huge improvement, and instead of a maudlin curiosity we have a behemoth of heart wrenching capabilities. Think of Low's 'Laser Beam' from Things We Lost In The Fire - McArdle has that haunted delivery that Mimi Parker embodies, so when she sings It was over before it began you are lost at sea, never to return.

I seriously cannot explain how much this track has blindsided me. If Ides only launches this song before Joanna Gruesome swallows up McArdle whole, it won't matter - 'Prisms' is a minor masterpiece.

You can get 'Prisms' from AIH's Postcard Club here. Ides is playing the UK's B's (Bristol, Brighton, Bournemouth) in August and finishing up with the AIH festival in London August 31st.