Crashing into Scott and Charlene's Wedding 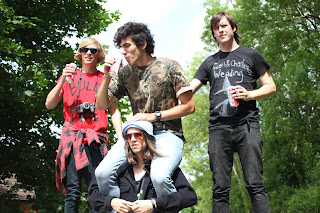 Looking for something can be the worst way to find it. It's not that looking is bad in and of itself, it's just that we have a tendency to, before looking, define what it is we want to find - pretty much 'eff-ing' (or at least 'F-ing off') the ineffable from the get go. 'What exactly are your goals here?' they will ask. The stuff of 'Performance Reports', 'Key Indicators' and the like; a successful life defined by a clearly outlined set of criteria. But can we really organise our cosmic junk shop in such a way?

Just like fellow Antipodean ex-pat Peter Porter pointed out in 'A Consumer's Report', when it comes to life, there is no 'best buy'. There's no X-marked map or guide book on this lonely planet, there's just the sun, the stars and everyone [in] between. So if you're dizzy with ambition, forget about flying to the heart of the sun for a moment (you're not heat resistant anyway) and enjoy the orbit.  Sometimes you just gotta let the ineffable 'eff' you. And when you're smoking a cigarette afterwards you might even find yourself smiling.

And even if you hear the door close in the morning before you get up, rest easy, you can still put on Any Port in a Storm to remind yourself we're all in the same boat. Scott and Charlene's Wedding may not save you, but hey, it's likely nothing ever will, so go where it takes you - you never know what you'll find.

You can order it from Fire Records in the UK or Bedroom Suck if you're downunder. And if you're in the Europe, there's sure to be a show in a port (or yoghurt shop) near you soon: