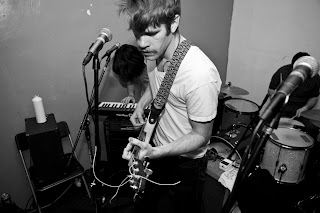 Exploding In Sound are figuratively (and probably literally) blowing up with their recent releases, with both Fat History Month and especially Ovlov offering stellar records of late. That doesn't mean the label has exhausted the coffers however.

New York's Porches. are releasing their debut LP Slow Dance In The Cosmos late August, and it's a corker. Swinging inexplicably between 60s pop rock, maudlin campfire musings, reverb-heavy Casiotunes, wonky slacker euphemisms and a lead in Aaron Maine who sounds like a cross between Mark Koselek and Brandon Flowers (similar to their labelmates Fat History Month - well, except for the Brandon Flowers reference. I feel I should clarify isn't a backhanded compliment - Flowers and his cronies had the inkling of something in those first two albums, which the excellent collab with Lou Reed verified, before they decided they would rather be U2). Intro song and single 'Headsgiving' is fantastic, even though the opening riff sounds not that dissimilar from another (ex)labelmate Speedy Ortiz' 'Silver Spring'. That is part of the charm of Porches. - that despite the genre hopping (the spazz-synth faux RnB of 'After Glow'; the faux MOR ramble of 'Franklin The Flirt' - just a lot of fauxs really, with tongue planted in concrete in the cheek), Maine manages to anchor it into a skewed world where everything is aligned and in its right place, for better or worse depending on the abuse being suffered or inflicted, a tawdry scratched out existence. Slow Dance In The Cosmos is its own beast, inhabiting the same cracked, homespun world that Exploding In Sound seems to be cultivating whilst ensuring their environment is invariably their own. 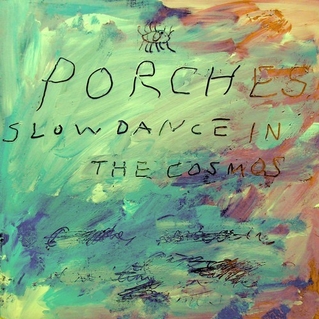 Pre-order Slow Dance In The Cosmos here - it's a keeper.