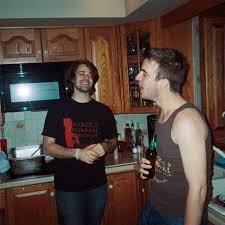 Philly dude Cough Cool brought out 29 on Bathetic Records last month (who are amazing, and if you haven't bought either the Lee Noble records or the Kwaidan one yet then you are a dunce), and its a beguiling behemoth of a record. Dan Svizney has chosen to imbue his melted pop transgressions with mechanical digressions, drum loop syncopations and that iconic reverbed vocal hush this time around, and rather than sending it spiralling on some incidental tangent, has fortified the penchant for hazy, half-formed thoughts, irksome inertia and sunlight stealing through the curtains. It steers enough away from the much furrowed ground of beach pop and bedroom etchings, finding itself in some po-faced purgatory between the two, and he fidgets in the ethereal waiting room, itching to get back out into the real world yet unsure what he'll do when he get there. He isn't moping about though - tracks like 'Misfits 4x4' or 'Disclosure' offer a sense of insistence that life is uncertain, so get on with it. Others like 'Intro To Regret' has a little more snarl about it - an insolent reverie that still doesn't have the cajones to come out and rough it. Which is OK, because we're all having fun, and that's the point, right? Plus those guitar lines should be on repeat for days like this. 20s are the new 20s.