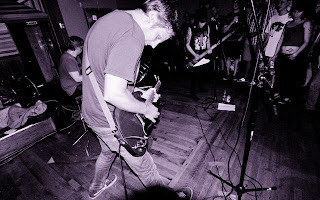 I thought I'd end off  Chicago's Daylight Robbery, who I caught playing a no-frills rocking set at The Waiting Room on Friday night (alongside others such as Roku Music and Screaming Match). The trio are no nonsense, clearly doing it for the love of it, and there was something disarming about their throwback garage punk that is often missing from others of their ilk.

I'm closing down for the weekend. I'm a little bit sore from last night's stellar Trainspotters gig (thanks for coming out, by the way), I'm dreading my first day at two of my jobs in three weeks tomorrow, I've done a mountain of washing, and I'm looking at the final day of the Ashes Test with a queasy sense of trepidation. I need to medicate. And their latest release, the EP Distant Shores, is the ticket. Apparently created specifically with this tour in mind (they only released their Ecstatic Vision LP last year, but wanted something "new" to bring with them), the three tracks electrify; fast paced and urgent, with a mirthful glint in the eye, feeling more in sync with MC5, the Jam and X than more recent punk luminaries (which also speaks to their final show being a support of Straitjacket Nation). 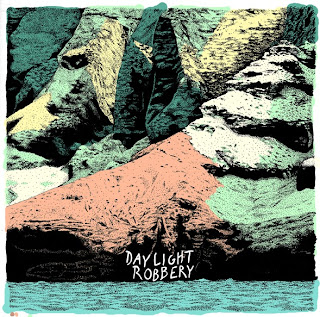 You can pick up Distant Shores (in white 7" vinyl), and indeed any of Daylight Robbery's back catalogue, from here. They are halfway through an extensive Australian tour, have been playing with the likes of Deep Heat, White Walls, Cuntz and Native Cats of recent times, and they have tapped another show tonight at the Crowbar alongside the ever-excellent Blank Realm (Yoghurt Blood are also playing a rare set).