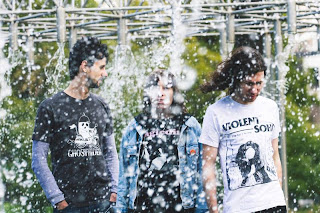 There is a part in the filmclip to Damn Terran's new single 'Lost' where the soapy dyed water looks like a top down MRI of a brain and eyeball. That kind of sums it up for me. Still singular in their aims but kind of a cleaned-up a bit. Thinking person's rock; still slippery in parts.

I must admit, though, it frustrated me at first. There is a chord change early on which hints that this one might push the gain through the roof. It remains but a hint. This track is an effort of far more restraint. More the leaning against the wall after everything has caught up with you, less climbing the bar, demanding people, henceforth, refer to you only as DDP. But on a second listen, that second verse grabbed me. It wasn't the lyrics, it was that tone - what a voice. There is something lurking behind this. I have a feeling that, live, any pretense of it holding back won't last past the chord change. Diamond Cutter!

You can get a hold on 'Lost' here and tickets to the show at Liberty Social, August 14 (with the mighty Violent Soho here.
Posted by Unknown