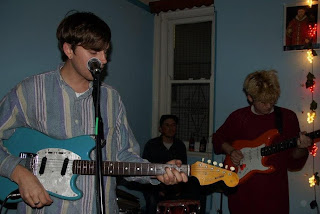 Curtis Wakeling's solo endeavours as Velcro continues to thrive. Not only has it fleshed out into a five-piece that includes most of his Ocean Party buddies, but he is about to release a compilation cassette called Tidal Wave 2009-2013, made up some of his demos that are yet to be released (on Curtis' Velcro and The Ocean Party bandmate Lachlan Denton's new label, Osborne Again). The first taste from it is called 'Rise', and its awash with languid reverb and a sauntering weariness - a melancholy weight hanging over the seemingly perfunctory effort of getting out of bed. I've always wanted a maudlin downer to take with my morning murmurs - this fits the bill.