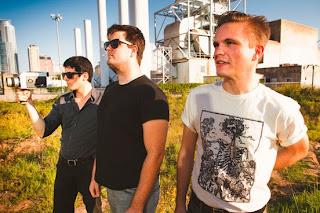 I have been intending to write about Totale Nite, the second official LP from Tampa brooding weirdniks Merchandise, since it came out a few months ago. It's been interesting (and at times frustrating) seeing this band develop over time - the band members having come from some nihilistic hardcore bands of the region (especially Cult Ritual and Neon Blud), some were perplexed and angered by Merchandise's first release, the EP (Strange Songs) In The Dark (we thought differently, and it made it onto my 2010 best of list). That said, their jerky shifts from release to release has irked also (and unfortunately I fall under this umbrella), as Children of Desire stripped things bare  yet stole the vulnerability that made Strange Songs such an entrancing concept, eschewing everything to smash into a punkier realm, adding adamantium to those skeletal remains which seemed to defy the successes of their beginnings. Totale Nite is yet another transmogrification, but here they continue to float farther from the genesis with more direction and purpose. These songs stretch well beyond breaking point, and the post-punk/free-jazz mash provides many intriguing, exciting (even sensual) delights - this is Smiths/Joy Division adulation times 100. You can't help but wonder if Merchandise have been, and continue to, take the piss - difficult to gauge if this is a true harbinger of musical greatness in evolution, or a social experiment. Which has me liking Totale Nite even more - and more willing to embrace those efforts I found wanting. Still - Strange Songs rules hard. Night-People are responsible for putting Totale Nite out - grab it here. 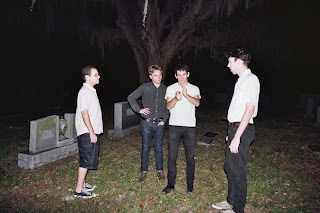 Now I wouldn't have written all that if it wasn't for Dads. Not your dad (although he is alright), but the new Tampa band that features Merchandise' Carson Cox and Patrick Brady. This is a more abrasive endeavour, harking closer to those burgeoning roots of the likes of the plethora of Dischord Records acolytes than Merchandise will ever traverse. They are still a relatively obscure concept, forgoing much in the way of backstory or media connection (as is Merchandise, which is valiant but does bug me a bit - unfortunately I too must see myself as part of the "written scourge"). Yet Dads is a much more hammer-and-tongs visceral experience, another act to dip their wicks in the waters of 90s rock angularity, and the Invisible Blouse 7" (out through Wharf Cat Records) is a shotgun-blast gem. Whilst their self-released and recorded LP Brown On Brown (recorded in their garage) will get a reissue also, that will seem like a prologue, as Invisible Blouse is leaps ahead in fidelity and kinetics. Whilst Merchandise is an exercise in exploring pop rigour through interesting compositions and genre melds, Dads is all about the purge - and I couldn't be happier. You can get Invisible Blouse here.