Hidden Amongst The Silhouettes Of Viet Cong 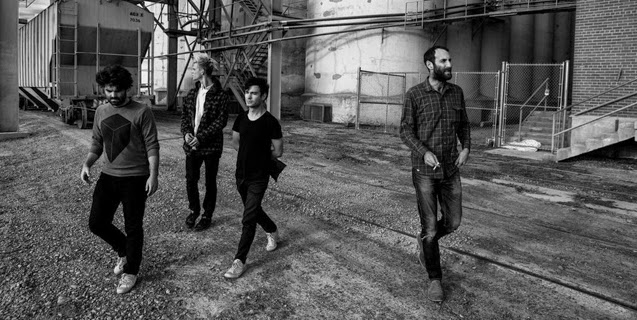 The Canadian band Women has been a common reference point here at Sonic Masala. The sadly defunct band (splitting after a somewhat public disagreement between the Flegel brothers, then the untimely death of Christopher Reimer) produced two brilliant albums in their 2008 self-titled debut and 2010's Public Strain, which was our favourite album of the year. So whenever any of the remaining members put something out it is feverishly exciting to me.

Last year, when Blank Realm were in London, Dan Spencer picked up a vinyl copy of Viet Cong's EP Cassette. Featuring ex-Women Matt Flegel and Mike Wallace, with Scott Munro and Daniel Christiansen, Viet Cong produced an album that was a little closer to the pigeonholed sound they were inadvertently placed in - which was excellent, of course. But now that the self-titled debut is just out (via Jagjaguwar) they have beefed up the sound and upped the ante. The noise is a pleasant addition, yet their presence is as much in melody and elegance as it is aberration and dissolution. 'Continental Shelf' is the perfect amalgamation of the old and the new. Its bombastic, almost arrogant in the way that the various elements of the more abrasive end of the rock spectrum are given room to breathe in a prism of pop sensibility - I can't help but think of Pixies when they disappeared a little further down the rabbithole, bereft of their knowing smiles and kitsch. It's good to have you back, boys.

And then there is 'Silhouettes' which marries this to a Joy Division/Kraftwerk frenetic heart skip/synth gloss. What a heady brew we are in for.


Viet Cong is out now. They are playing in London on February 4 at Hackney Oslo, with support from fellow Canucks and motorik fiends Absolutely Free. Grab tickets here.
Posted by Brendan T