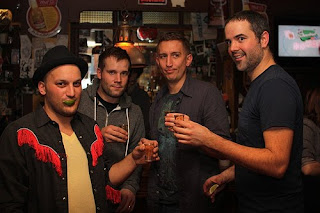 Toronto-based instrumental band Old World Vulture really impressed me last year with their self-titled EP - here me waxing lyrical about its shiny twists and turns here. Well, clearly I'm not the only one impressed with the band, as 2011 has seen the quartet play alongside some great acts. The greatest highlight though was snaring the support slot for Mogwai's Toronto show in April.

Now they have a single that precedes their debut LP, called 'Trophy Lovers'. There is a noticeable difference in that the squalling guitar/bass double-barrel assault is dialled right back, with shimmering synths coming to fill the gaps. Not as much a departure as that sounds, though - it feels like they may have been watching a little bit of countrymen Holy Fuck... Thus, still uber excited about this release.