Return Not So Yucky 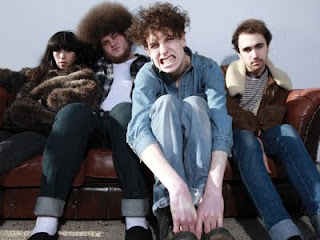 2011 has been a Yucky year. The quintet from London have really come into their own, dominating most festival stages, being at the pinnacle of the hip as fuck blogosphere intelligentsia, and raping the slacker rock songbook writ large.

As you can see from the above, I don't have the biggest love.

It stems from the only time I have seen them play, as a support for another massive band that I don't "get", Real Estate, back in January last year. Real Estate I found to be incredibly boring - I spent most of their set standing at the downstairs bar at the Lexington drinking Jagerbombs and talking shit to my sister and some other person to this day I cannot remember. Yuck and Colours supported, and whilst both acts exploited the Pavement MO, it was actually Colours who came away with the most points in my opinion that night.

Yet the release of Yuck has gone gangbusters for the Londoners, and although im happy for them, I haven't really given them the time of day (except for Mogwai's ace remix of 'Rubber'...). It seemed that they filled out the right questionnaire or application form, for, like Colours, there seemed to be many bands mining the 90s penchant for noodling guitars and haphazard pop hooks yet they remained on the periphery, whilst Yuck conquered the US and jammed with Jools.

Now Fat Possum is re-releasing Yuck as a double LP stacked with B-sdies and rarities. The editor at Time Off magazine in Brisbane implored me to listen, to be more forgiving (as he has seen millions of bands on many different continents, it kills him to know that he hasn't seen Yuck, an employee has, and said employee slags off his favourite new band on regular intervals).

Get Away
The Wall
Shook Down
Holing Out
Suicide Policeman
Georgia
Suck
Stutter
Operation
Sunday
Rose Gives a Lily
Rubber
Milkshake (previously available on limited vinyl only, streamed digitally)
The Base of a Dream is Empty (vinyl and digital B-Side to Rubber)
Cousin Corona (iTunes bonus)
Soothe Me (brand new)
Coconut Bible (B-side to Holing Out)
Doctors In My Bed (vinyl B-side to Get Away, only streamed digitally)

So I have. And it's...pretty good. Im not changing my tune too much - I really don't get hooked on these tracks at all enough to spin the record on frequent occasions - but it's ok. Right place, right time perhaps? 2012 will tell...

Below are two of those "new" cuts. Believe me, there is substance here. 'Soothe Me' has seen a lot of press due to the blatant Kevin Shields stealing, but who doesn't in this day and age? It is also a sound that is stolen precisely because its a style that can go with almost any other genre, and its cool as fuck. And it probably isnt their fault that they have been lauded so hard. AND, as seen by my intermittent Real Estate posts, I will give bands a second chance if it's deemed warranted. And on the strength of these two tracks alone, I may still be bemused at the level of hype and adulation, but it has me soothing the previously held rage. These kids seem ok. Bring on LP #2.

Before the band retreat into the studio however, they are slamming the UK in one final jaunt - although the London show is already sold out (again, THAT confuses me...)