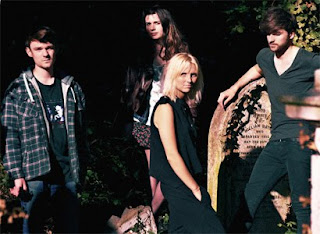 First turned onto this London via Brighton band through Art Is Hard Records, Fear Of Men recently recorded a set of songs in anticipation of their forthcoming tour with another SM "One To Watch" (I have never said that about another band, at least not given a definitive label - but it's kinda true, we are fans here) Bos Angeles. The avid experimenting with mic placement and an eight-track tape recorder produced some gems, called the Alice Munro demos (to be released December 12), and the best of which is 'Doldrums'. Suitably gloomy and jangly, akin to Brisbane's own Keep On Dancin's that we showcased yesterday, or even another Brissy band Feathers, the track shows a gloss that we haven't associated with the group in the past, and may be a slight glimpse into their beautifully morbid future...

Email ThisBlogThis!Share to TwitterShare to FacebookShare to Pinterest
Labels: Art Is Hard Records, Bos Angelese, Fear Of Men, Feathers, The Keep On Dancins