Have Some Faith In Errors 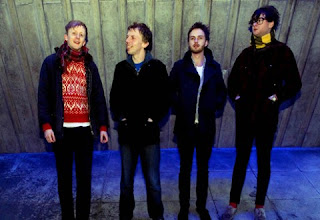 One of the most innovative instrumental bands in the world now is Glasgow based Errors. On one of the most influential instrumental bands of the world's label (Mogwai's Rock Action Records), the four-piece have exploded since releasing their second LP Come Down With Me in 2010. They are preparing to release another hybrid meta-beast upon the quivering masses in the form of Have Some Faith In Magic, off which the single 'Earthscore' leaps from - and they threaten to rip the time-space sontinuum even further by providing more dominant vocals! Agh! Before this release though they have spent the past few months supporting label mates (and bosses) Mogwai in the US, then support Mogwai again in Glasgow just before Christmas, before planning to assault the UK's senses in February.