Getting That Poppy Buzzed 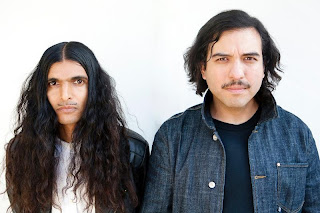 Last year I got into a record by psych instrumentalist Imaad Wasif (you can read about it here). This has been in the pipeline for a while now, but Narnack Records is ready to release Electric Flower onto the global populace. Formed by Josh Garza (of Secret Machines) and Wasif, Electric Flower is preparing the release of their debut self-titled EP a week from today. They are quick to stress that this is NOT a side project - it is first and foremost their main day band. They met during the filming of an episode of Top of the Pops (this was when Wasif was a touring member of the Yeah Yeah Yeahs). The friendship and now musical partnership has coalesced from there into something that is very exciting indeed. Eastern infused drone psych rock malaise, anyone? Ill gladly overdose on it.

It will be available digitally and on limited foil stamped, red 10-inch vinyl (tasty - and only 500 copies available, get in there!)