Get Pleasured By Witch Hats 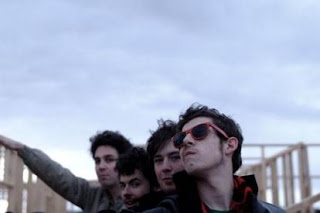 Today heralds in a few days' worth of posts devoted to some fantastic Aussie releases that I have been saving up, including ones by Royal Headache, Straight Arrows, Dead Farmers, and Total Control. Not all of them are this year's news, but are warranted another look in. This one though, is fresh off the presses, and is a veritable delight to boot.

Melbourne's Witch Hats have the guttural firepower and diseased charisma necessary to corrupt the minds of the masses. On their debut release Cellulite Soul the rawness and aggression inherent in their swagger suggested that style and substance weren't independent of each other, instead always wrestling for control. And in Pleasure Syndrome they really nail their MO to the wall. The beauty of this LP though is that the cohesion, the Araldite that grips a band into a fevered vortex of sonic elation and cosmic power, seems to have arrived. By the metric tonne.

Opening track 'The Bounty' is the perfect example of this. Frontman Kris Buscombe still sounds ready to double glass you at the drop of an ill-place syllable, yet there is a comfortable presence behind his lyrics now that suggests that such a glassing wouldn't be a violent outpouring so much as a graceful balletic manoeuvre that you would be in awed fascination by even as pints of blood pulses out of your split forehead. Such reigning in of the bountiful seams of sleazy abandon is what makes Pleasure Syndrome an infinitely better release, and possibly one of the best Aussie releases of the year (neck and neck with another that I will talk about very soon...) 'Mahoney' lends lyrics that sings to their previous incarnations, the S&M rife imagery as disturbing as it is titillating. 'Hear Martin' has taken references to serial shooter Martin Bryant, thrown together some Clash and Doors hubris and percolated it all with a sense of lackadaisical longing - something that shouldn't work, yet offers a slinky number that exudes originality and intensity. Closer Closing out with the suitably heavy 'Ashley', Witch Hats assert the notion that they are well-heeled rabblerousers with hearts of tainted pitch.

Pleasure Syndrome is out now through Longtime Listener.