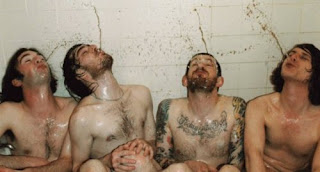 I still remember the second time I saw Leeds legends Pulled Apart By Horses, a small show in the cavern that is the 100 Club. They set a blowtorch to my brain and mailed me the remains. Their self-titled debut LP was killer, even if most of the tracks had been floating around in one form or another for years. So its with feverish excitement that I present their new single, 'V.E.N.O.M'. It is out in January through Transgressive Records. It is the first cut of their time with legendary producer Gill Norton (Pixies, Foo Fighters etc), ahead of the album’s release in 2012. Tentative title? Tough Love (indeed...) The single will be released on digital and 7” formats and will be backed with two exclusive b-sides. Fuck yeah.

The band are smashing the winter out of the UK in February. Below are the tour dates. Can I smell an Aussie assault? Its all in the wind...for now.