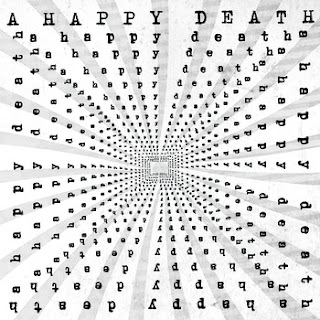 It's taken me a while, but I received this 7" EP from New York-via-Portland band A Happy Death about three weeks ago (and is that an esoteric title I see before me? Camus fans playing short, spiky garage psych? Well, I never...). Like, physically received it. And as the Tympanogram blog states, that is a beautiful thing. However, I hadn't gotten around to even listening to it until last week due to a multitude of tiny factors equalling a massive clusterfuck of issues. But now I have. And whilst it is nothing necessarily new, it is a hell of a lot of fun.

I was a fan as soon as I saw the song title - 'Nazi Zombies'. I have lost many a drunken/stoned early morning hour trying to kill those WWII undead critters... and this track is just as sordid and dirty, yet wearily addictive. You want to stop you really do - but just one more listen... The playfulness continues with 'Surf Rock Band,' suitably scuzzy, noisy, and smart-arsed. 'Mr Rutter' offers the other facet that such an EP needs - a faux ballad that slumps around the dark alleyways spouting the sour tales of a transvestite factory worker (for real). Then 'Ghost House' kicks the final limb out from under you, leaving your prostate and gagging.

The psychedelia that A Happy Death play around with is deeply entrenched in garage rock, like much of today's DIY rock outfits tend to be, but with the right balance of shambolism and anarchism, they have crafted a gritty slice of wanton cheese.

Email ThisBlogThis!Share to TwitterShare to FacebookShare to Pinterest
Labels: A Happy Death