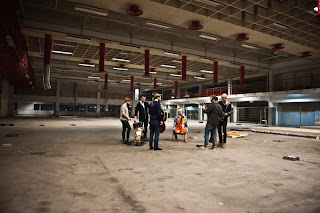 Here is another brilliant guerrilla initiative by maverick crew They Shoot Music Don't They. They have a new series of offstage videos entitled THE COPENHAGEN SESSIONS! For three they intend to meet bands in Copenhagen and film offstage sessions in the autumnal darkness of the Danish capital, inviting international and Danish, upcoming and acclaimed bands to play in front of the lens. The locations are bike sheds, industrial buildings, cafés, parks or just streets - nothing is sacred.

The first release is with the amazing Seattle-based Craft Spells. After being kicked out of a laundry they play two songs ('The Fog Rose High' and 'Your Tomb') in an abandoned shopping mall in the Vesterbro neighbourhood of Copenhagen.

The second episode features Philadelphia-based The War On Drugs playing a semi-acoustic session in the bike shed of a school in Copenhagen's Christianshavn neighbourhood, including performances of 'Brothers' and 'Best Night' from their new album Slave Ambient.

And finally (so far, at least...) we have the 7-piece Danish folk-pop band Cody, recorded in an abandoned building in the abandoned Carlsberg brewery in Valby, Copenhagen.

Email ThisBlogThis!Share to TwitterShare to FacebookShare to Pinterest
Labels: Craft Spells, The War On Drugs, They Shoot Music Don't They, Video Vacuum