Thos Voices Will Guide Us To The Very End 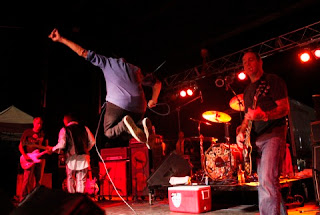 I saw Times New Viking play earlier this year in what was one of the best shows of 2011. However one thing they mentioned struck me as a little...well, sad, although I understand the idea. The band mentioned that now that they are in their thirties, they feel a bit silly from time to time creating noise and thrashing about, and are considering their options for the future. The Columbus Ohio trio are fantastic, and self-confessed Guided By Voices fanatics (no less due to the hometown connections), so I hope they look to Robert Pollard to see how it can be that they make it work.

Guided By Voices go from strength to strength, and have just released the below track off the forthcoming Let's Go Eat The Factory LP (featuring the classic line-up that includes Tobin Sprout - and he's writing songs again!). Pollard has also released an awesome album with side project Boston Spaceships which will be here very shortly. These guys have been around much longer than TNV, and are still finding ways of being inimitably awesome. Hopefully some of that Columbus mojo will rub off on them...

Let's Go Eat The Factory will be out New Year's Day - what a way to bring in a bleary-eyed 2012! Actually, maybe the world cannot handle this record - this is what the Mayans warned us about! Ah well. In that case, I guess there is no hurry in keeping TNV together...

Tracklist below (the amount and brevity of tracks also heralds TNV - come on guys, stay on for the good of humanity!!!)

Laundry And Lasers
The Head
Doughnut For A Snowman
Spiderfighter
Hang Mr. Kite
God Loves Us
The Unsinkable Fats Domino
Who Invented The Sun
The Big Hat And Toy Show
Imperial Racehorsing
How I Met My Mother
Waves
My Europa
Chocolate Boy
The Things That Never Need
Either Nelson
Cyclone Utilities (Remember Your Birthday)
Old Bones
Go Rolling Home
The Room Taking Shape
We Won't Apologize For The Human Race