Weird Wives Swear And Drone On A Lot 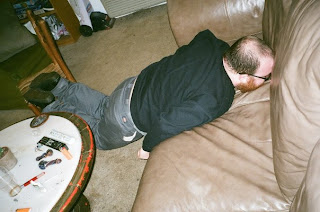 The incredibly abrasive alter ego of Surfer Blood, Weird Wives put out some insidious little demos earlier this year that got under the skin and into your cerebral vortex, shutting everything down whilst flooding the blood stream with endorphins. Not a bad way to get rigor mortis on I suppose. Well they have just released an album, and the title is killer - Motherfuckers Gonna Be Walking 'Round With a Size 9 Diehard up Their Ass, Cause Apparently They Ain't Never Seen a Short AC Man Get Bad Ass on Methadone. Someone's looking to piss off mummy and daddy...

It still follows in the Jesus Lizard mold, but has a slower, more lethargic grind to it. In some ways this works to their detriment, for all you want is a proper explosion of fury and intent, rather than such constrained, fitful fare. But there are some tasty tracks on offer, no less 'Plastic Masks' which is all yours below. The Pitchfork review is pretty hasty in my opinion, but then I haven't lived with the album for that long. Still - I'd hedge my bets it's a better stayer than those guys are letting on... It's out on West Beach Beotches now.