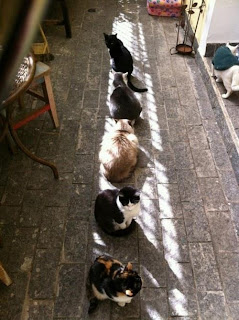 Wow, so we are having possibly the sunniest day in Brisbane since - well, I can't remember. I've mentioned before that the rain hasn't bothered me, that I've enjoyed it in fact, but maybe I'm just lying to myself. Before I go outside with my shirt off, I thought Id give you chumps who are stuck indoors something worthwhile to look at. OOO LOOK AT THE MOVING PICTURES...


The first of two music vids from my fair city of Brisbane comes from mood ramblers Morning Harvey. 'Sundown' is a typically haunting guitar driven track, driven by young adult malaise and hedonism, further augmented by the equally evocative film that oozes sensual desperation and vice. It's a classy effort all round, and has me mightily excited for their upcoming debut record, due out sometime this year.


LA sisters Bleached have shown a lot of promise, releasing some great 7" (especially Carter on Art Fag) and next month will finally be launching their debut record Ride Your Heart through Dead Oceans. Attractive yet highly stylised girls playing rock - it could be bland and unadventurous yet successful due to hipsterfied saturation (think Dum Dum Girls), but sisters Jennifer and Jessica Clavin manage to lend their pastiche on late 70s punk the right mixture of sweet vocals and bitter issues and pills to swallow, that attitude and ambition often equals their actual output. In short, Bleached often hit the spot with a raw rock sound that doesn't sound half-assed - unblemished by outside influences. 'Next Stop' perfectly captures this attitude, and bodes well for the LP.


Can you believe Gravel Samwidge are still going, let alone this good? This is the same band that formed in 1989 and played opposite the likes of Lubricated Goat, King Snake Roost and pre-Cruel Sea Tex Perkins, after all. With a forthcoming cassette release imminent through Long Gone Records, the now Brisbane-based slimy guitar riff band have put together a black and white vid for the track 'Ferris Wheel' starring ringleader Mark Spinks and cameoing the inimitable Gerald Keaney (from Gerald Keaney & the Gerald Keaney's) as a tortured unloved gimpish guitar pedal.

NOW GET BACK TO WORK!!!
Posted by Brendan T