No Young Adults Past '91 Young Adults released Black Hole almost two years ago, and still stands as one of the best discoveries that Sonic Masala has made - see here and here if you want to get reacquainted (the second post is from co-founder Paul - ah the memories!). It's been a while (the band has a new bassist, thus having spent the downtime teaching him the old songs, writing new ones, and playing show after show, becoming a stronger unit in the process) but a follow up EP has arrived in the form of Born In '91, and its just as serrated as its predecessor. Taking shoegaze guitar and bludgeoning the speakers with it in an energetic purge a la A Place To Bury Strangers, Young Adults excel largely down to the fact that they use noise as poetic emphasis as opposed as an out-of-control jackhammer, erratically taking chunks out of your psyche. Melody and feedback coexist in a white noise environment, underpinned with the affected shouts of leadman Chris Villon as he articulates the tribulations of traversing the gap between youthful times of carefree innocence to the darker realms of adulthood (making their nom de plume ever more appropriate). This is the right kind of brutal, with immense power and replay value. 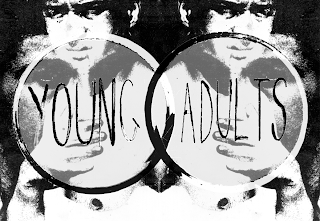