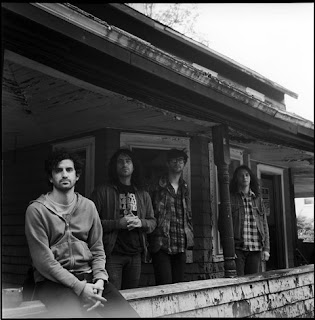 The Men have been workhorses, tirelessly touring whilst bringing out a record a year. Their latest album is New Moon, and despite the brilliantly executed shift in tone and musical approach that occurred on last year's Open Your Heart, opening track 'Open The Door' is bound to throw you, starting with a slightly honky-tonk piano a la pastoral Neil Young (also the name New Moon could point to the new direction for the band, or a tip of the hat to Young himself). In fact we see two halves of the album that represent the split personality of the New York four-piece - the part that electrified audiences with their brazen brand of hard-edged punk underlined with an economical, no-frills approach to making noise (and still do); and the earnest songwriters, using the generic tropes of popular song structure to expand on what is and should be expected of any band, let alone The Men. 'I Saw Her Face' is possibly the best example of this - a Neil Young/Crazy Horse countrified dirge, with fantasy/reality lyrics and a wonky, can-fall-apart-at-any-time distorted guitar sound whilst Mark Perro warbles along with the high timbre that mirrors the cagey, cracked-genius Canuck. It's an excellent song, and despite the second half steering closer to past hardcore/garage glories and concepts ('The Brass', 'Electric', the excellent noise wigout closer 'Supermoon') it's becoming clearer than ever that The Men are growing into themselves nicely (listen to the country rock jangle and harmonicas of 'Bird Song' if you aren't a believer). There is no pretension here - the band are finally embracing all of their influences, and in doing so are redefining themselves, and possibly a whole sound. Country as the new punk? That's what true country has always been. 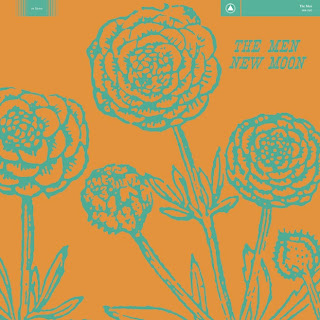 New Moon is out now through Sacred Bones - you can pick it up here. It's bloody great.