Friday (Night) Cover Up - Zoo Fallout Leaves Me Joed Out 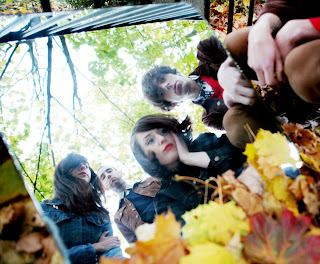 Late in the night. Just went and saw Deerhoof tear the Zoo apart, supported by the elegantly eclectic Primitive Motion (bought their cassette to boot) and one of the best young bands in Australia, Blank Realm (inexplicably short set, yet was pretty damn great nonetheless). After many beers, found it hard to fight the urge to smoke - but I did it. Seriously, quitting anything is hard and pretty bogus, health risk or no. Anyway, I forgot a Friday Cover Up, and in lieu of missing out on Veronica Falls' current covers EP (at only 300 copies it was going to be hard to get it, yet Rough Trade's website did me an injustice by telling me there were copies, to go through to checkout, put my details in, then be told it was sold out - grrrr...) I'm listening to the equally rare Veronica Falls covers EP from last year. Especially their Verlaines cover - 'Joed Out' is a great song anyway, so it's a great way to wind down the wee hours. Good night kids.

Email ThisBlogThis!Share to TwitterShare to FacebookShare to Pinterest
Labels: A Friday Night Cover Up, Blank Realm, Deerhoof, Primitive Motion, The Friday Cover Up, The Verlaines, The Zoo, Veronica Falls