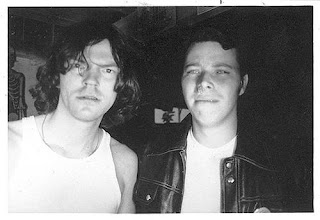 When Gulcher Records mentioned they were re;easing these two records from St Louis tripped out punks The Screamin' Mee-Mees, some four months after Jon Ashline lost his ten year bout with cancer (Bruce Cole is the guitar demon, whilst Ashline was pretty much everything else). 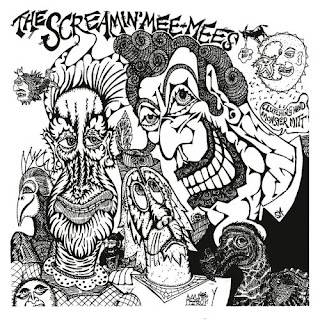 The Clutching Hand Monster Mitt EP was originally released in 1992, some fifteen or so years after their first foray into taped sounds took place on Live From The Basement. is scuzzy, tetanus-dirty, stream-of-consciousness inanity, yet is infused with such a virile energy that these tracks end up bordering on maniacal genius. 'Riotous Crowd' opens the whole shebang, and you wont get a more cracked garage psych noise meltdown if you pay a bunch of homeless hounds to recreate Tommy with power drills and garbage bins. It's darkly brilliant - listen to 'Visions Of The Dark Pumpkin' and tell me this isn't incendiary spitballing freakout material. 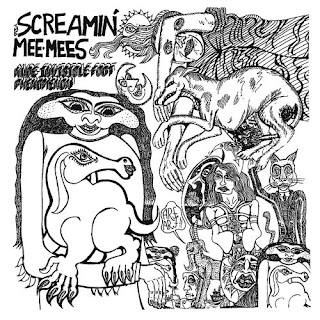 Then we have 1996's Nude Invisible Foot Phenomenon LP. Further augmenting the deranged Seuss singsong lyrics that Ashline crafted in such a lurching manner, shortening the track lengths, and eradicating the evidence of any space within the noisy clutter, the record succeeds in putting the insanity under the glare of a microscope, Jumping back and forth in time to emulate the acid friers, Flower Power abusers and alcohol lovers that littered the darker, dingier corners of musical rock history. 'Smarter' remains as weird as they come, and proves the perfect bridge from the EP, but we have straight up dumb pop like 'The Grand Old Duke Of York' or 'Dogfishin''. The true stroke of genius though is the noise manipulations of avant garde track 'Chinese Handcuffs' - achieving a sense of sonic purpose that likeminded artists filled with more self worth than they know how to handle it could create in their lifetime.

You can get these adventurous mind melts here. If you like what you hear, you are in for an absolute treat.
Posted by Brendan T