Looking Beyond The Cyclopean 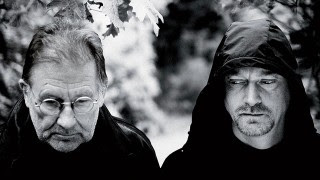 Monikers are funny things. Two of the bands I’ve posted about this weekend I had serious misgivings about, before I had read a line of press release diatribe or heard a note of noise. One is Soccer Mom, which I posted about yesterday – and I STILL struggle with that one (sorry guys...).

The other is Cyclopean. The only reason I opened up this email was because it came from Mute Records (alongside Spoon Records), I should add), and they have a much higher hit-to-miss ratio than most labels of their ilk. Then on opening it, I discovered the real reason people have have been muttering this word under their collective breath the past couple weeks. Cyclopean is half of Can. That is a holy shit moment right there. Jaki Liebezeit, and Irmin Schmidt, MAKING NEW MUSIC??? But then I thought, “How did I not know about this earlier?” And it’s simple. The name. I had possibly come across it and completely blanked it out. I know this is kinda bad – there are plenty of bands with TERRIBLE names that have made groundbreaking, earthshaking, era-defining music – but I cannot help it. It’s the blessing and curse of constantly sifting through the shit to find that nugget of gold. And for every ten, twenty, thirty artists whose name perfectly captures who they are (read: shit), there is one you miss. Cyclopean was that miss.

So – the EP. Four tracks of percussive ambiance combining with musical manipulations that belies the relatively small running time (admittedly two of the tracks exceed six minutes - but it feels like half that time). Pretty much what you’d expect from two dudes who pretty much carved the Ten Commandments of kosmiche rock into the heavens and etched the mission statement onto the soul of the unending zealous masses since. But that sounds rather throwaway, and it shouldn’t be taken as such. In fact, as you listen to the way these four songs - 'Apostles', ‘Fingers’, ‘Knuckles’, ‘Weeks’ – interweave and interact with each other, begging for the repeat button so that they segue into each other endlessly, the band’s name – Cyclopean – starts to take on resonance. This is repetitive music through contradictory methods; creating mantras through Newton’s 3rd law of motion (For every action there is an opposite and equal reaction). So in 'Apostles' we have percolating beats and electronic nuance, all syncopating without denying each other space; 'Fingers' a little more haunting, the guitar played like an intergalactic dulcimer, synth washing sonorously in the background before building into a 70s sci-fi mantra; 'Knuckles' and 'Weeks' crackle and fizz, the unorthodox drum machine and percussive manipulation reaching an apex. 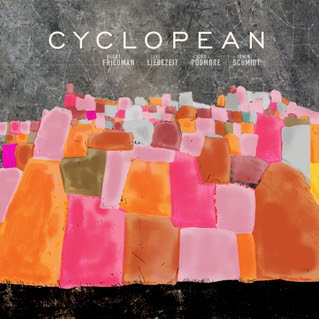 It's hard to describe what is going on here, especially why it works. Cyclopean may be a play on form and composition, but its experimental elements are pinned down by the adroit mastery of the quartet's craft. You can buy the 12" EP here.