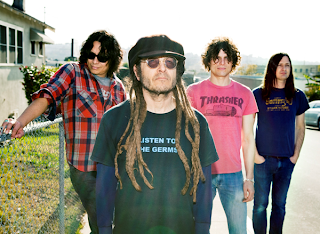 OFF! certainly killed when they came to Aussie shores December last year, even if their entire setlist had to be played twice so that they could play a decent running time. Their songs are pretty killer though - coming from the ashes of Black Flag, Circle Jerks, Redd Kross, Hot Snakes, Rocket From The Crypt and Burning Brides, it's not really a surprise. Their self-titled album comes out in May on Vice Records, and the song below is the first taste. So far, so awesome. Also, it is meant to be 16 songs in 16 minutes. Breakneck then. Looks like they'll still need a few covers to break that half hour playing time then...

Pre-order the album (and get it in white) here. (NOTE: since publishing this the vinyl has sold out - 1500 out the door like that! More will be on call soon, in black though, but stay tuned).