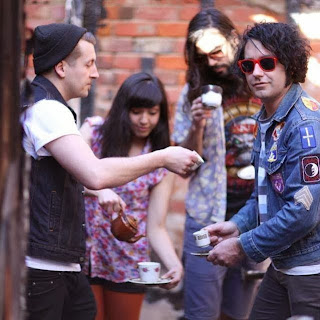 Excellent Melbourne label Every Night Is A Saturday Night have corralled a damn fine roster over the past year and a bit (Batpiss, The Spinning Rooms) and they can now cram Bad Vision into the fold. The band released their self-titled debut 12" back in November (I know, where was I, right?) and with Mikey Young behind the controls, you know it sounds sick. Bad Vision is pretty straight up with its intentions - fast and loose figuratively, fast and tight musically, thrashing through the types of garage punk that proliferated the back streets of the Seventies. References are rife, but it's best to focus more on the whole album, one bristling with desperate, bratty energy, feverish sweat flying off the fret, relentless rhythms marching you into the sea of writhing bodies that makes up the front of the stage. Because Bad Vision, whilst not a "live album", is permeated with a sense that this is the tip of the iceberg when you see them in the flesh. Not so much a calling card though as it is a reminder that straight up punch in the face rock and roll is more than enough justification to live another day.

Email ThisBlogThis!Share to TwitterShare to FacebookShare to Pinterest
Labels: Bad Vision, Batpiss, Every Night Is A Saturday Night Records, The Spinning Rooms