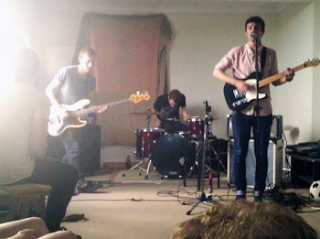 Some more Tenzenmen releases on the way – Shaun is a demon! – so I'm a little behind. Nevertheless I thought I’d start with a great release from new local group, Make More. The trio have sprung forth from the untimely demise of post-hardcore outfit To The North (vocalist Cameron Gillard is now a part of Little Shadow, another band helped out by Tenzenmen that I wrote about here). They had some tracks put aside for a 7” called Less Deaths that also fell through, so whilst they work diligently on their debut LP, they are offering these tracks to the world for free. Anyone who knows To The North know that the instrumental engine room was one of the tightest and exciting collaborations in the local scene, so the fact that they continue to work on their unique musical relationship is certainly a good thing. And their influences – “coffee, Haruki Murakami, British comedy, Japanese culture, Beijing bands, Superchunk and the Smiths” – regardless of whether they are tongue in cheek or not, are all things that I personally connect with, and I think these three songs are a killer introduction to the new incarnation. I reckon you will too. As soon as I hear more, you will be the first to know – until then, delve into these tracks and let me know what you think!