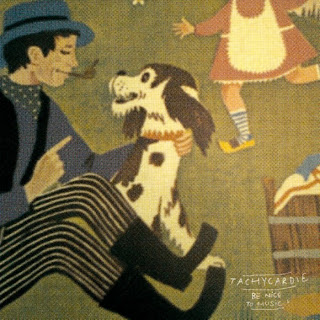 Now I'm tearing myself out of my cave with noise and bluster with the aid of Be Nice To Music, an ironic album title from French noisenik Tachycardie who does his utmost to abuse and violate your cerebral lobe. Think Ex Models, think Lightning Bolt, think early Liars, think That Fucking Tank! - shit, think of any aggressive noise outlet with propulsive hedonistic drumming and squalling guitars that nevertheless incorporate pop sensibilities into the mix (albeit screwed up almost beyond recognition) and that is Tachycardie's MO. I have had this album sitting around for a while, and I'm might pissed I haven't taken it on board before a couple weeks ago. This is a lot of white heat, mind melting fun.

Be Nice To Music is out through French label Cocktail Pueblo (who nonetheless have an 80s picture of Australia's The Big Banana as their banner - weirdly awesome!). Get it here.