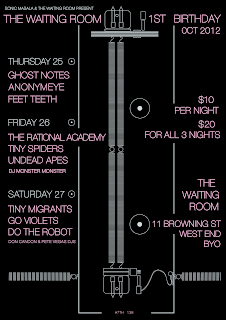 Well here it is, the "Big" announcement. It's actually been floating around the traps and the social medias for a while, but it ain't official before it's launched here. This month marks one year since Sonic Masala started supporting the local bands of Brisbane, putting on DIY shows for friends and bands that I like and want to help out. We have had a single launch, an album launch, and even had a couple interstate and one NZ band join the fray. The future looks incredibly rosy for this arm of Planet Masala, with some bigger shows, niche shows and such planned for 2013, but let's forget about the future and party in the present! As part of local venue The Waiting Room (who are also celebrating its first year putting on amazing shows) we are putting on a three night extravaganza! Its mainly to thank everyone for supporting us over the past year, but also to see bands that we like and who like us. So its a big love in, basically!

Three nights of awesome fun times, Im sure you'll agree! Tickets a $10 on the door, or for $20 you can go to all three nights! And of course its BYO, so you know it will be a cheap and easy night. Tiny Migrants promise to "blow y'all cocks off", so the bar has been set. See you there!
Posted by Brendan T