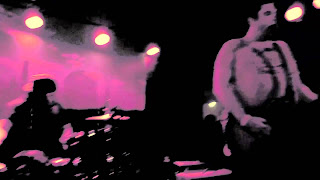 Seeing as Guy Fawkes Night came about due to insurgent anger at persecution (however misguided), I thought the two entries today should have their fair share of teeth-baring animosity. I'm kicking off with New Orleans punks Buck Biloxi & the Fucks who have already sold out of most copies to new LP Streets Of Rage (you can grab some copies here). Brutal and combative, rank and diseased, viscous and virile, Streets of Rage turns the detritus and bugbears of lowest common denominator society and spins it into rancid gold. From 'Rock 'n Roll Sucks Part 2' to the tin-can slammed 'Everything Is Fake', the album is for shitkickers and rabblerousers alike. It's a little clearer than previous Fucks releases, which tells me one thing - with such desiccated brilliance, 'I Don't Wanna Be Dead'.

Email ThisBlogThis!Share to TwitterShare to FacebookShare to Pinterest
Labels: Buck Biloxi and the Fucks, Hozac Records