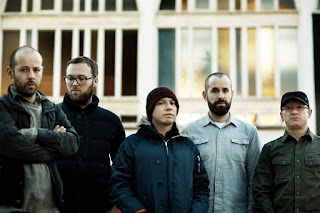 The evolution of rock titans Mogwai continues. Those familiar with the Scottish band's soundtrack work (particularly for Les Revenents AKA French zombie hybrid masterpiece The Returned) will be comfortable in the knowledge that they have become just as devastating with nuance and drum machines as they have with eviscerating noise. So their remix of influential composer Ludovico Einaudi's 'Drop' is as evocative, beautiful and haunting as you would wish for, with no true building coalescence - it drifts off into the spatial ether, an oscillation sounding out in the depths. What with this, their twentieth-year anniversaries, and release of retrospective best-of Central Belters, Mogwai continue to prove that they are untouchable.


NB - it has just been announced that John Cummings has left the band to pursue other musical interests. The band continues on though, with the current members (Dominic Aitchison, Stuart Braithwaite, Martin Bulloch and Barry Burns) being joined on their upcoming live shows by Scott Paterson and Luke Sutherland. We here at Sonic Masala wish John all the best and look forward to hearing what his next sonic stage will be.