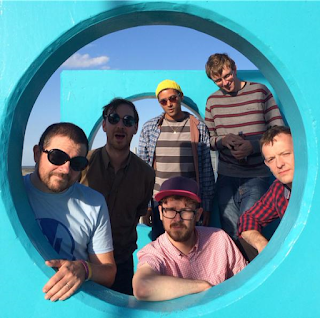 I’ve been waiting for some time to get to this split record between UK malcontents Hey Colossus and Aussie instrumental destroyers Hotel Wrecking City Traders – but not as long as the two bands have been trying to bring it to fruition, with the bands staying in contact and shooting the shit about collaborations since 2006. They finally played together last year and the excuses became null and void – and here we are.

The A-side (which is redundant really because this is all A material) is taken up by 'Heaven Blows', Hey Colossus' ten minute atonal drone, spending the first third in cryogenic free fall, all manner of post-life matters passing before the eyes and between the ears, a meditative splitting of atoms, slowed down 1200%. The questions being asked doesn't matter - the pulsing ebb here renders them all obsolete. A real sonic palate cleanser from a band more renowned for tearing temporal rifts in time and space into much more warped parallel dimensions. The boys may have a new album already out - more on that soon - but it's imperative you dip into this. 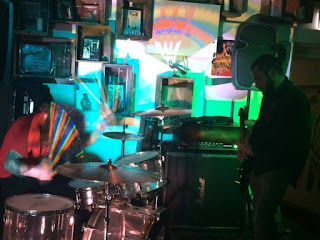 Then double down on 'Droned & Disowned (Pt 2)', the Melbourne contingent smashing forth with a terse yet tightly calibrated twenty-minute leviathan. This is HWCT's bread and butter though, finding the grit and sinew in the elongated sonic crawl, finding the feral and fugue states in the funk, finding the clarity in the clouded haze. Forever restless, forever entwined in both darkness and light. The Matthews bros know when to let loose, when to distort, when to pare back, when to groove, when to cut. Telekinetic alchemy, the changeovers and dips into the rock abyss would be mind-boggling if it wasn't so expected from these guys. The funk cuts to the grind, and it's breathtaking - this is something I never tire of listening to.

You can get the split from either Wild Animals Records or Bro Fidelity Records – a must.