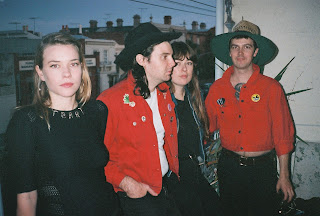 Want some wonky, off-key, fully addictive scrapheap pop? Try Talk About Terry, the new 7" out by new act Terry through Upset The Rhythm. A veritable Melbourne supergroup, Terry features the already-spread-thin Al Montfort (Dick Diver, Total Control, UV Race, Lower Plenty, shall we go on?), Zephyr Pavey (Total Control, Eastlink, Russell Street Bombings), Amy Hill (Constant Mongrel, School Of Radiant Living) and Xanthe Waite (Mick Harvey), Terry are all about bad choices (don't listen to them state to the contrary), but delivered with such a feather-light level of jangling insincerity that it doesn't matter. Doug Mosurok calls it "post-traumatic pop" which made me laugh, but is pretty apt too - there is a yearning for acceptance in the early hours of repetition and regret that lends Terry both a fragility and a acerbic wit that belies its slightness. Great stuff. Grab the white 7" here.