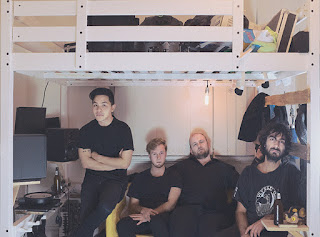 Sydney dark distorted dreamers Cull have FINALLY have brought us their debut album, Aloft, and they are finishing up their East Coast tour tonight in Brisbane at the Foundry (alongside Sonic Masala band BARGE With An Antenna On It and two SM faves, Spirit Bunny and Blonde Tongues. The album is as anthemic, operatic, awash with gossamer sonics and quirky left-field shimmers and stutters - the magical flourish effect that floats over 'Magi Fuel', the bent faux-yacht warble that permeates 'Truth Bomb', the harped effect that flutters its fiery fingers over the tetchy spaces of 'The Quality Of Being Lifelike'... Cull are a different band, in that it is hard to really pin them down. They have elements of Radiohead's insidious experimentation, the bent pastoral psych of Tame Impala, the slowburn intellectual dreamscapes of Pink Floyd - but then it is none of these things either. The esoteric, shapeshifting nature of the songs on Aloft could come across as too obtuse - and on paper, I wouldn't normally subscribe. But these guys have that hidden apocryphal vial, that untenable talent that is fused in their DNA and no-one else's, that makes them unique and endlessly intriguing. And when they let go with the wall of sound, you know you have been hit - in the chest, in the brain, in the heart, in the psyche. (Plus they are lovely dudes, so that helps). Get Aloft here, get to the Foundry tonight, get Culled.

Email ThisBlogThis!Share to TwitterShare to FacebookShare to Pinterest
Labels: BARGE with an antenna on it, Blonde Tongues, Cull, Spirit Bunny